In 2020, a lot has looked different, and for the first time, many of us were not able to come together for various special occasions throughout the year. At Refugee Action Fund, we faced this challenge in thinking about how to plan our annual benefit gala, which is typically held in-person in New York City and is crucial for our fundraising efforts. Despite not being able to celebrate the evening physically together for the first time, we are proud to announce some other firsts: our first-ever virtual gala, our first-ever silent auction, and our most successful annual benefit ever!

On Sunday, October 4th, more than 200 people from locations all over North America came together virtually for a moving evening of discussion about how art can play a role in creating a more welcoming society. Together we raised over $315,000 in support of refugees in the U.S. and around the world – surpassing our goal by over 50%! 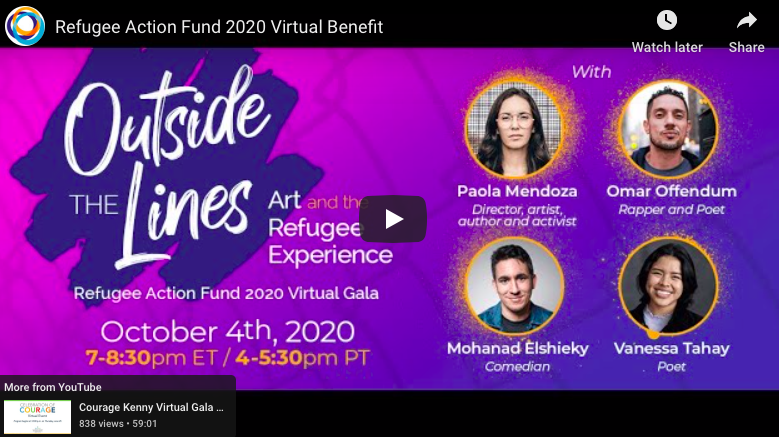 We were so blown away by the support of our community and the way art was able to unite us from afar. Outside the Lines: Art and the Refugee Experience consisted of a discussion, moderated by Refugee Action Fund co-founder Hussein Allidina and Executive Director Julie Gersten, with four artists who are using their art to shape a better world – a world that is just, welcoming, and inclusive of the voices of migrants and refugees.

If you didn’t have the opportunity to join us live, a recording of the program is accessible here.

We first spoke with Vanessa Tahay, a spoken word artist who uses her voice to empower other youth to find their voices, and to spread awareness for undocumented families and women’s rights. Vanessa’s poem, A Dream in Five Days, speaks about her journey coming to the United States from Guatemala as a child. Speaking about her path to becoming a poet, Vanessa told us, “It’s a privilege to know that I get to share my story… because not many people have the opportunity to do that… people have been silenced, people are scared to share their own stories… This is my chance to let people know the truth, and I tell it how it is.” [18:20].

Next, we heard from Paola Mendoza, a film director, artist, activist, and New York Times best-selling author; she is the co-founder and artistic director of The Women’s March. Paola’s work is at the leading-edge of human rights; when asked about the message she is trying to send through her body of work that spans so many artistic mediums, Paola said, “[my art is] all love stories between mothers and their daughters… being the child of an immigrant, the responsibility of what that means – knowing that my mother’s sacrifices of her own personal dreams – she gave those up for me. So I’ve taken that on as a very personal mission, to honor her as much as I can.” [23:00]

Paola’s work often seeks to show the strength of humanity through the beauty of her artwork. Speaking about her photo series that followed a 2016 caravan of migrants from Central America, “Imagine what this 5-year-old, who walks, by herself, 18 miles a day, what she is capable of [in the United States] if we give her the structure and the ability to do.” [27:20]

After wrapping up with Paola, we transitioned to Mohanad Elshieky, a Libyan-born, New York-based comedian with a special skill for making you laugh at the seemingly unlaughable. In Mohanad’s performance we watched from 2019, he showed us the comedy in everything from not wanting to speak to your Uber driver to extremist Libyan militias.

The oldest of five children, Mohanad shared with us his journey from medicine, to journalism, to business school, to comedy, spanning from Benghazi to Brooklyn. He first came to the U.S. for an academic exchange program in 2014, but ended up staying to seek political asylum when it became too dangerous for him to return to Libya. “Comedy gave me a way to control the narrative… to talk about the stuff I wanted to talk about in the way that I wanted to tell it to people.” [50:05] “It’s a way for people to see me as an immigrant, as a refugee, through a different lens… people in the U.S. have an idea of what an immigrant is… I think when people see me, they see something different.” [52:28]

We closed our program with Omar Offendum, a Syrian-American rapper and spoken word artist, known for his unique blend of hip hop and Arabic poetry. Speaking about the inspiration for his career, Omar said, “I’m just so grateful, and I feel somewhat a sense of responsibility, that I was one of the lucky ones who was able to get here… Knowing that hip hop and spoken word poetry is often rooted in activism, and the fact that the art itself feels so much more gratifying knowing that I can attach it to something greater.” [59:00]

To close out our program, Omar said, “[Refugee Action Fund] is the perfect organization to be donating to right now… be as generous as you can, especially in this moment, because not only are you able to do something so important for people who need it, but you’re also setting an example for the kind of America that we want to live in… and the kind of future that we want for all of our children.” [1:13:35] You can make a donation to support Refugee Action Fund here.