From the Border to the Capitol: Protecting Refugees During the Biden Administration

This general insistence on the idea of a “surge” or “crisis” at the border is problematic in and of itself. It is dramatized and feeds into a xenophobic narrative being pushed by people who don’t want to see immigrants of any kind come into the country. – Elizabeth Foydel, IRAP

Violence is rampant. Men, women and children are being kidnapped. Yet we see the United States using Title 42 to deport pregnant women, newborn infants as young as two weeks old, and children in the prime of their development who should be protected. The majority of children being deported to Haiti right now were not born in Haiti. They were born at the U.S.-Mexico border. – Guerline Jozef, Haitian Bridge Alliance

The Biden administration inherited a dismantled system for supporting and welcoming refugees and asylum seekers. Yet, the U.S. has a legal obligation and a historical responsibility to provide protection to people fleeing violence and persecution. The Biden campaign promised it would welcome refugees and asylum seekers with dignity. Three months into a new administration, what has changed?

To help us understand how the Biden administration is shaping up to protect refugees and asylum seekers, Refugee Action Fund hosted a Lunch and Learn with two of our grantees, Guerline Jozef from Haitian Bridge Alliance and Elizabeth Foydel from the International Refugee Assistance Project (IRAP). 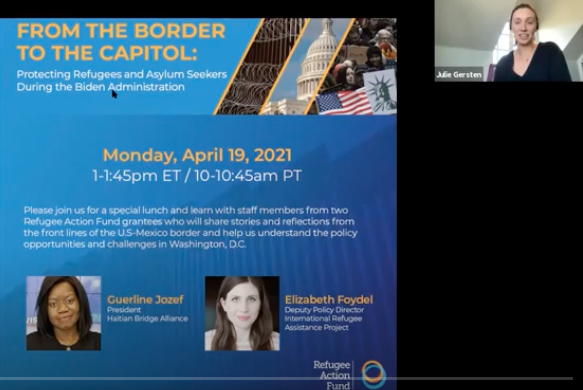 Here are some of the most important takeaways:

While the Biden administration has made some strides, today the U.S. border is still closed to asylum seekers as a result of two U.S. policies—the Migrant Protection Protocols (MPP) and Title 42. MPP requires that most people remain in Mexico for the duration of their immigration proceedings, even though they have the legal right to seek asylum in the United States. Title 42 was created as a public health policy during the COVID-19 crisis but has been used as a catchall to deport people legally applying for asylum and to effectively close the border, even though the U.S. has otherwise remained open to travel throughout COVID-19. What is often described by the media as a “border crisis” is, in reality, the effect of policies that have created confusion and backlog.

Because of a judge’s ruling, unaccompanied minors are the only people being allowed to enter the United States to claim asylum. As a result, desperate families are sometimes making the heartbreaking decision to send their children to the United States alone. Elizabeth noted that this policy caused an increase in unaccompanied minors at the border and feeds into the narrative of a “surge at the border”; making it challenging for IRAP and other advocates to advance the policy changes that were proposed by the Biden campaign.

For black asylum seekers, racism compounds an already complex array of difficulties facing displaced people. Systemic racism is woven through our immigration system. Haitian migrants spend more time in detention and face higher bonds for their release. Guerline emphasized that so far under the Biden administration, over 28 flights have left the U.S. to deport Haitians back to Haiti—a country that is currently facing the worst social and political uprising it has experienced in over 50 years. And, while the Biden administration has designated Temporary Protective Status to Burmese and Venezuelans, it has not provided the same protection to Haitians.

The Biden administration needs to feel political pressure to ensure that it upholds its promises to create a humane immigration system. We can help by urging our Members of Congress to welcome refugees and asylum seekers with dignity.

As Guerline reminded us, the need facing refugee and asylum seekers are tremendous and can feel daunting, but many hands lighten the load. We are grateful for your generous support so that we can continue to provide funding to support forcibly displaced people seeking safety in the United States and around the world.